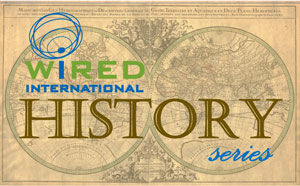 WiRED started operations in 1997 by providing Internet connections in war-ravaged towns throughout the former Yugoslavia. Now we focus on medical and health education in underserved regions around the world using computer technology. WiRED’s training programs have become global resources, used by hospitals and clinics, schools, other non-governmental organizations and universities. On this Web page we will look at WiRED’s history, the people who have contributed to the mission and those who have benefited from the work of this volunteer-driven organization.

Two computer technicians and I rode in a small van headed down a dark rutted road in far eastern Croatia. We had worked a long day in the war-damaged school in Vukovar, a town disfigured and dispirited by conflict sitting on the edge of the Danube River. We were exhausted, hungry and drained of emotion, eager to reach the next town, 30 miles away, to get a sandwich and a few hours of sleep before returning to our work at the school. There were no hotels in Vukovar; they were long gone. Read more »

WiRED’s History Part 2: WiRED Turns Its Focus to Medical and Health Education after Work in Kosovo

In 1999, not long after the end of NATO’s aerial bombing of Serbia, the U.S. State Department asked me to join a team that the Department had assembled to build a network of seven Internet Access Centers (IAC) across Kosovo. The State Department had been tracking WiRED’s Internet programs elsewhere in the Balkans, and it recognized that WiRED International knew the region, knew the technology involved and knew what training programs were necessary to prepare administrators to manage local centers. Read more »

We left the International Organization for Migration (IOM) offices in Pristina, Kosovo, early on a summer morning in 2000, allowing plenty of time to reach the Skopje airport in Macedonia, 54 miles away. It was Sunday, so traffic was light. Five hours should be enough time to navigate our van over the badly damaged roads, breeze through the border crossing and cruise on up to the airport, where the crowds would be minimal. And so, four of us — the driver and I, a nurse and a five-year-old boy — rolled out of town and on our way. Except for the nurse and the boy, we were strangers to each other. Read more »

In the late 1990s, HIV/AIDS continued to frighten and mystify. It lashed out at populations around the world, but it hit communities in Africa especially hard. Entire villages were wiped out; in many places, only the very young and the very old survived, with the middle carved out by a disease most people could not understand. This cruel and seemingly indiscriminate illness rendered its victims frail ghosts of their former selves, symbols of an evil in towns throughout the African continent. While in the United States and Western Europe, AIDS was initially known as a gay disease,1 in Africa, the devastation to both men and women azlike suggested to many that some other curse was at work. Read more »

Early in 2003 WiRED International launched a Medical Information Center (MIC) in the Faculty of Medicine at the University of Nairobi. U.S. Ambassador to Kenya, Johnnie Carson, gave the keynote speech during which he discussed the power of information. I’ll get to that in a minute, but first I would like to tell a brief story about an incident that took place during the ribbon-cutting ceremony.
Read more »

WiRED’s History Part 6: The Beginning of WiRED’s Work in Iraq

May 2003, soon after the U.S. invasion of Iraq — Some people are blessed and can sleep through anything. As luck would have it, I’m not one of them. It was 1:30 in the morning, my first night in Iraq. I was staring at the ceiling, listening to the howling sandstorm pounding the side of the building, which happened to be one of Saddam Hussein’s palaces. Along with the sound of wind and the grating of sand against the windows, I could hear the snoring of 20 men in our makeshift dorm — two rows of steel-frame cots — set up for advance teams. With the arrival of troops in Baghdad in the spring of 2003, the United States and other coalition member countries sent people to help with infrastructure, security, administration and the other services needed to stabilize Iraq. Read more »

Before leaving Iraq after my first visit, I frantically searched computer shops in Baghdad to find hardware for the MIC we would install at the largest hospital complex in the country. I found a good lead in Talal, an Iraqi businessman who saved his computers from the violence of war by securing them in a barn outside of town. He said he would bring a dozen computers to Baghdad when I returned. Read more »

WiRED provided medical and health education programs in Iraq from spring 2003 to late 2009. As the two prior stories in this history series describe, we worked initially from the relative safety of the Green Zone, then from Baghdad hotels and safe houses while providing Iraqi hospitals and universities throughout the country with equipment and training software. Having few financial resources, we traveled without security details, instead remaining inconspicuous, beneath the radar of insurgents. We rode in battered cars whose windows were broken and taped; the tape obscured our identity. We had close calls, as did anyone who traveled in Iraq during the mid-2000s, witnessing the violence firsthand. We lost friends who suffered vicious and deliberate attacks because of who they were and what they were doing to help the Iraqi people. Read more »

It’s a custom in many countries for religious leaders to bless new facilities, such as new offices, schools and community programs. In Nicaragua, a predominantly Catholic country, a priest will generally perform the ritual, which involves a prayer and maybe a brief homily before a gathering of well-wishers. And so, while WiRED remains firmly nonsectarian, ensuring its neutrality in all countries, we typically follow local customs when launching a new health education program. Read more »

The Armenian countryside is breathtakingly beautiful. The lush, green fields in the mountainous northeast are deeply creased and laced with rutted paths etched by livestock over the centuries. The land in Armenia, and its history, stretching back to the Bronze Age, are tightly bound. When visiting here, it’s tempting to visualize shepherds during ancient times, tending sheep on the sides of these hills. The Armenian story thus tells about its great beauty, and its rich and complicated history. Sadly, it also must include its long-standing conflict with its neighbor to the east, Azerbaijan. Fighting, which started a century ago over Nagorno-Karabakh, has of late picked up steam. Although hostilities occur mostly in the southeastern portion of Armenia, where, last year, more than 200 people on both sides were killed, tensions remain high along the entire border. Read more »