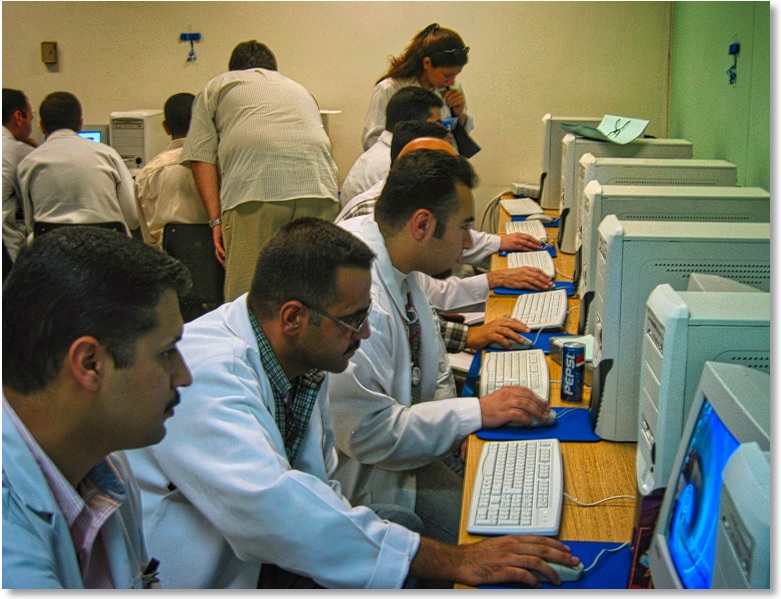 As we have described in previous stories posted from our archive, WiRED worked in Iraq at the request of the U.S. Department of State. The following two stories, from June 2003, describe the opening of WiRED’s first Medical Information Center (MIC) in the largest teaching hospital in Baghdad: Medical City Center.

One story is a press release issued by the U.S. Department of State, Bureau of Educational and Cultural Affairs. The second story was written by WiRED’s staffers.

Note that the second story references other MICs that WiRED would set up in Baghdad, one at the National Spinal Cord Injury Center hospital. That MIC was funded, in part, by the Christopher and Dana Reeve Foundation.

In a massive explosion on August 19, 2003, a truck bomb blew up the United Nations headquarters in Baghdad, killing 22 people. The Spinal Cord hospital, located near the UN headquarters, was heavily damaged in the blast, and along with it the WiRED MIC. Several months later, the hospital was repaired enough to restart operations. The MIC was also put back into operation. 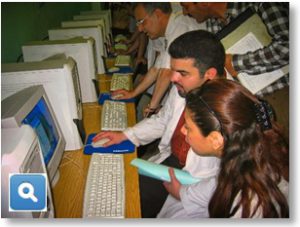 The Department of State’s U.S. Global Technology Corps (USGTC) — a program administered by the Bureau of International Information Programs, Office of Technology Partnerships — is providing computer technology and training to medical students in Baghdad, Iraq as part of a joint public diplomacy initiative with the Bureau of Educational and Cultural Affairs.

[this] first-of-a-kind center will give Iraqi physicians the information they need to catch up with medical developments after more than a decade of isolation.

Dr. Selnow, also a professor of communication in the College of Business at San Francisco State University, noted in his remarks that “[this] first-of-a-kind center will give Iraqi physicians the information they need to catch up with medical developments after more than a decade of isolation.” Despite periodic power outages during the ceremony, more than seventy doctors, nurses and students packed the new medical information center and flocked to the workstations following the formal opening.

Three similar medical information centers will be established this week at two other teaching hospitals in Baghdad, and at the Spinal Cord Center, a specialty clinic for severe neurological injuries. CD libraries of current health education materials will provide the initial content for the centers, in anticipation of Internet access as the infrastructure to support it comes on line.

The USGTC partners from WiRED International are in Iraq this week under the auspices of the Department of State’s Bureau of International Information Programs, the Bureau of Educational and Cultural Affairs, the Bureau of Near Eastern Affairs, and the Office of the Under Secretary for Public Diplomacy and Public Affairs. This innovative public diplomacy collaboration supports U.S. government efforts to rebuild critical infrastructure in Iraq and reach key audiences, including the medical community.

On Tuesday, June 24, 2003, WiRED International launched the first of several Medical Information Centers at a ceremony held in Iraq’s largest teaching hospital. This 10-station computer network and e-library of medical topics will provide more than 1,000 doctors and medical students with information about the latest advances in the diagnosis and treatment of illnesses.

The medical community in Iraq has been isolated for many years and this Center will introduce physicians and other healthcare professionals to the many developments that have evolved in western medicine this period.

" . . . WiRED was one of the first organizations to assist with information programs in Croatia and Kosovo after the end of hostilities there, and is a brilliant choice to work with the Global Technology Corps of the U.S. Department of State to support the rebuilding of the medical community in Iraq,” — U.S. Congressman Tom Lantos (D-CA), ranking Democrat on the House Committee on International Relations.

“WiRED is a vital humanitarian organization ideally suited with the experience, technological and programmatic skills needed to carry out this work. WiRED was one of the first organizations to assist with information programs in Croatia and Kosovo after the end of hostilities there, and is a brilliant choice to work with the Global Technology Corps of the U.S. Department of State to support the rebuilding of the medical community in Iraq,” stated U.S. Congressman Tom Lantos (D-CA), the ranking Democrat on the House Committee on International Relations. 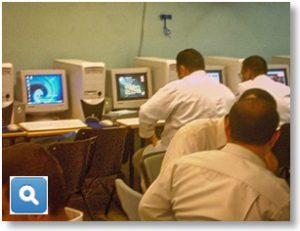 The ceremony included speeches by leaders of Iraq’s medical community who described how important this Center would become in the practice and teaching of medicine. Dr. Gary W. Selnow, Executive Director of WiRED and professor of communication in the College of Business at San Francisco State University, spoke about the capacity of computers to serve human needs and discussed how the information that is ultimately exchanged between Iraqi physicians and physicians elsewhere would benefit medical professionals and the people they serve. Mr. James K. Haveman, Jr., Senior U.S. Advisor to the Ministry of Health, noted the importance of the contributions of WiRED and the U.S. Global Technology Corps — a program offering of the U.S. State Department’s Bureau of International Information Programs, Office of Technology Partnerships, to the improvement of information for Iraq’s medical community. 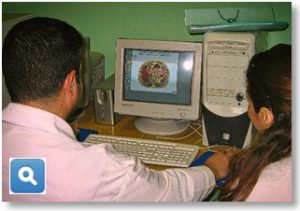 Approximately 75 physicians and medical students attended the ceremony that was interrupted by a major power failure plaguing Baghdad and the surrounding region at the time of the event. Auxiliary generators that provide supplemental power during daily electricity failures provided emergency lighting, but not power for the computers. Such an inconvenience that might have been a problem elsewhere was accepted as part of daily life in Baghdad. The computer demonstrations continued on battery power as long as possible and the ribbon-cutting ended in ever dimming light as the computers were powered down and guests returned to the streets of Baghdad or to the bedside of patients at Medical City Center.

“Gary Selnow has already shown that he and WiRED can change lives in the most impoverished or damaged nations through the elegantly simple model of his Medical Information Centers. He has taken on a huge challenge in Iraq but his record of success in other difficult locations and his intense dedication to this humanitarian work — despite its dangers — virtually ensure tremendous gains for Iraqi health care. His work is a stellar example of community service, a longstanding emphasis at San Francisco State University. In Prof. Selnow’s case, the community in which he works is half a world away,” said President Robert A. Corrigan, San Francisco State University.