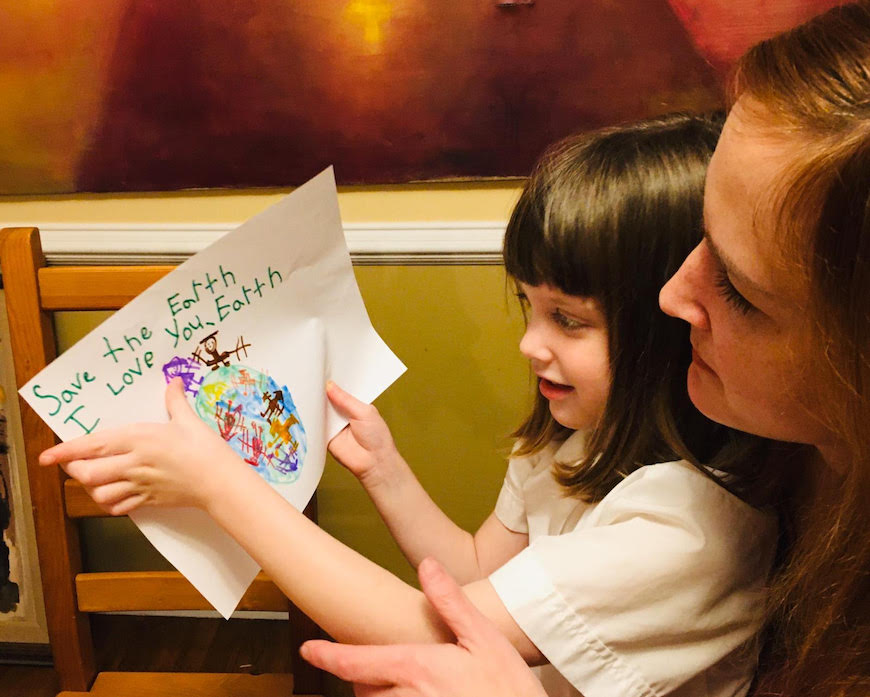 An Opinion from a Mother and WiRED Board Member

The New York Times recently ran a piece called “One Thing You Can Do: Talk to Your Children about Climate Change.” The article encouraged parents not only to talk to their children but to get them involved in solutions to the dangers of climate change.

I grew up in Princeton, New Jersey, in a family where dialogue between generations was encouraged from infancy. I was a senior in high school when the first Earth Day took place on April 22, 1970. My school cancelled all classes. Instead, we spent the day in workshops, “teach-ins,” designed to raise awareness about the need to protect our environment.

During the teach-ins, we learned for the first time about air and water pollution, deforestation and recycling. We read Silent Springby biologist and nature writer Rachel Carson and awoke to the dangers of pesticides and the decimation of bird and animal populations. We made the connection that human health was tied to the health of our Mother Earth, as is espoused today by One Health (see sidebar).

By the 1980s I was married, with two young daughters, and living close to Washington, D.C. Having grown up with activist parents in many arenas, it was natural for me to involve my own children from their early days in environmental issues.

Our house then was located in an area designated as an agricultural preserve. When my daughter Maggie was in fifth grade, her class officially adopted a piece of the C&O Canal National Park as part of the Adopt-A-Park Program. The local paper wrote an article about it. Maggie explained to the reporter that students were “going to be cutting grass and clipping things and planting seeds. It is really a great honor to be here.” One of her classmates summed it up by saying, “We really want to keep our environment. We don’t like all this pollution.”

At the same time, our whole family participated in a grassroots movement to stop a trash incinerator from being built within farmland called the “green lung of the county.” At age 8, Maggie wrote a letter to the editor in which she asked a county council member why he backed the incinerator when it would pollute the air. Didn’t he want clean air for his children? She ended her letter, “My classmates and I recycle. We can show you how.” The paper published the letter under the title “Out of the Mouths of Babes.”

Last month, youth from all over the world cut school to join global climate change strikes. It is time for us to listen to them and take action together, not as separate generations but as one.

Note: Allison Kozicharow is a WiRED Board member and managing editor and writer for the WiRED website. Her father, Dr. Richard Gilbert, was one of the founding members of WiRED.

The Concept of One Health and WiRED International

Conditions of a fast-changing global environment have accelerated the ways humans and animals interact, changed where they interact and altered the health implications of their encounters. Climate change’s impacts hit hardest in the world’s underserved communities where WiRED provides health education. WiRED is ever mindful of the social and environmental determinants of good health, which are access to medical care, clean air, safe drinking water, sufficient food and secure shelter.

At present, WiRED frames the training modules in our Health Learning Center within this delicate balance. Within the next year, WiRED will incorporate the One Health theme into a large project that creates a community health worker training program for low-resource areas. These regions often suffer the greatest impact from the changing climate and its resulting effect on humans and animals. The structure and content of our training program will reflect the vulnerabilities of these frontline communities.

From our field work in low-resource regions, we have become increasingly aware of the impact of a changing climate on human health. On a rapidly growing scale, the spread of disease vectors, crop failures, food insecurity, floods, droughts and blistering heat impact the health of people, animals and plants. We’re a small organization, doing what we can to teach people how they can arm themselves against the ravages of climate change, but addressing these issues must be an all-hands-on-deck, global effort. Yes, it should start at the level of government and involve our industries and organizations, but this problem falls to every individual. We’ll all suffer the consequences of inaction; before it’s too late, we all must do what we can to ease the burden on the environment. WiRED plans to continue raising awareness of climate’s impact on health in all our forums, including this website. The members of our board, our volunteers and staff will write occasional essays about the topic. We encourage readers to contact us if they would like to contribute a commentary about climate and health.