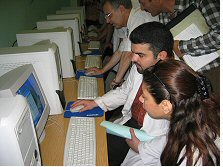 On Friday, July 21, 2007, WiRED’s telemedicine program in Iraq was the topic on one of America’s most-watched news programs, CNN’s Anderson Cooper 360. The story focused on the significant impact that WiRED’s low-budget, medical education programs are having in Iraq, in comparison to some large projects with budgets reaching $150 million that have “essentially fallen apart,” as described by Cooper.