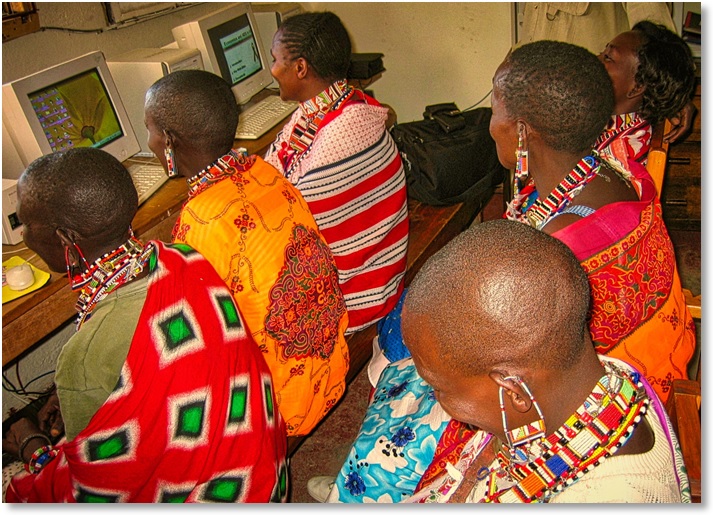 The following story describes how the Community Health Information Centers (CHICs) we installed throughout Kenya in the early 2000s evolved within the first year from a simple library, offering health information, into a more integrated learning center serving the needs of physicians, patients, students and ordinary community members. Our initial idea to use computers to teach people about HIV/AIDS had grown far beyond our expectations and demonstrated the validity of this statement:

“We at WiRED have learned that assistance programs are like ropes: you cannot push them, the people must pull them for themselves. Give the people the tools, the training, the ongoing help when and where they need it, and they will take the programs to places you could not have imagined for them.” — Gary Selnow, WiRED Founder and Executive Director 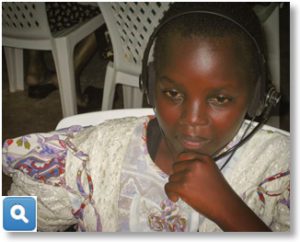 They serve as midwives in their villages, and they are fervently searching for ways to prevent transmission of HIV from mother to child during birth. They are also intensely interested in learning more details of how HIV is transmitted and how transmission can be avoided. With the new information they are able to gain at the Centers, they will be prepared to use their traditional, respected role in the community to make a persuasive case to their village for safe practices that will prevent continued spread of HIV.

African physicians trained in Western medicine find WiRED Information Centers valuable resources, as well. For many of the doctors, the new CD-ROMS are the only source of updated materials they have. Previously, information came to them only through discussions with other doctors in the region or through an occasional medical journal that drifted into their office. The doctors began using the Centers as soon as they opened and have made numerous requests for additional information. While much of the information available at the Community Health Information Centers focuses on HIV/AIDS, a complete spectrum of medical and health care information is available. The CDs cover common regional illnesses such as malaria and tuberculosis as well as health-related topics including prenatal care and childcare, hygiene, dental subjects and alternative medicine. 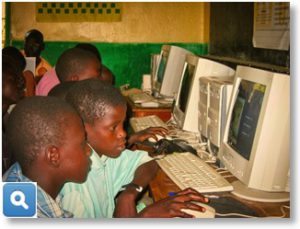 When WiRED’s Executive Director recently visited the centers in Kenya, he noted their requests for information and brought back to San Francisco the complete list of topics to expand the collection. As soon as this additional information can be compiled, the CDs will be sent to the centers for the doctors to review.

Now that physicians have become familiar with the Center resources, they are sending patients directly to the Centers to sit through tutorials that address the patient’s particular problem.

For young people, one of the most urgent problems is learning how they can avoid contracting HIV. Many of the young teens who come to the center are orphans; all of them have seen someone’s parents die from AIDS. The center provides the teens with a tutorial that explains in detail how HIV transmission occurs and what steps they must take to avoid contracting the disease. 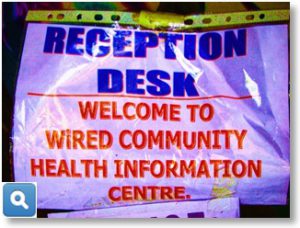 Community leaders come to the centers looking for ways to cope with the AIDS crises. They are all personally affected by the crisis, but they also face formidable government problems caused by AIDS. For example, they watch a deteriorating human resources infrastructure. Because AIDS appears most easily in the young, most sexually active segment of the population, a large part of a generation’s youthful energy, skills and productivity is being lost. The community leaders realize that containing the AIDS crisis is one of their most urgent tasks.

The centers maintain daily activity logs with records of clients’ professions, the reasons for their visit, disks they used, and topics they researched. The data from the logs is used to file monthly reports with the National Institutes of Health. The accumulated data will also be used at the end of the project to develop a thorough analysis. 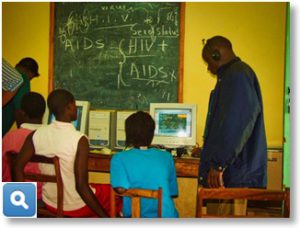 During his first visit to the Kenya Centers since they began full operations, WiRED Executive Director, Dr. Gary Selnow, found that the Centers opened to immediate demand for their resources. He reports that often there would be a line of clients waiting at the Centers in the mornings. Reflecting on the obvious need for information resources in the villages, Dr. Selnow states, “The Internet and CD-ROMS are a tremendously efficient way of disseminating up-to-date information. No other means could accomplish it so quickly, easily, and inexpensively. It is rewarding to see people respond so eagerly to the arrival of information that has been missing from their struggle to contend with AIDS.”