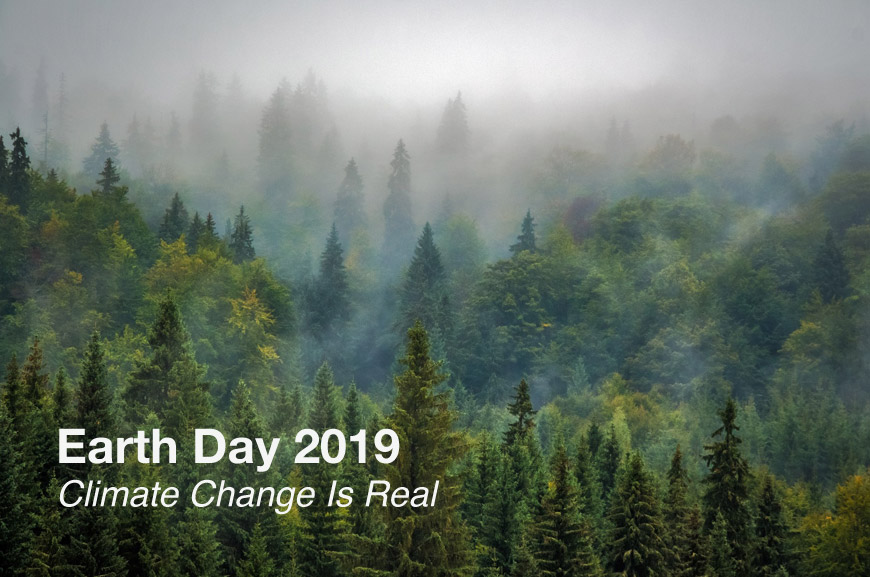 In the past year, WiRED International has posted a half-dozen Web stories about the environment and climate change. We raise the subject in editorials, descriptions of our programs and in articles submitted by contributing writers.

A good friend wrote recently telling me that he likes WiRED’s work on community health education, but he thinks our pieces on climate change and the environment are off the mark. In his polite and thoughtful way, he said, stay in your lane — which is health education.

I don’t fault my old friend for his view, but he’s wrong on an important point, a huge point, really, and on this Earth Day, I feel the need to respond to him and to others who either deny climate change or discount the scope of the threat.

My argument is simple, compelling and demonstrably valid: climate change is real, and it is measurably impacting so much of the planet. For some, those are fighting words, and I understand that. The case for the impact of climate change is based firmly on empirical observations, by thousands of respected scientists around the world. Moreover, ordinary people are now becoming frontline witnesses to the dire impacts of this existential danger.

I would like to lay out several relevant issues starting with the basics:

Increased carbon content is related to higher average temperatures of air and water. These lead to melting ice, expanded volumes of the oceans and increased ocean acidification. Warmer air and water result in more extreme weather with growing intensity and frequency of heatwaves and storms and an increase of ocean surges, floods and, at the other extreme, fires. Deserts are becoming hotter and dryer. Each claim is substantiated by empirical data.

Resulting from these conditions is the observable destruction of natural habitats, the displacement of plants and animals — on land and in the sea. Some species of plants and animals — those with the capacity to transition quickly enough — are migrating to higher latitudes and elevations. Less mobile or adaptable species die off, directly from warmer temperatures but also from predators large and small — animals, insects, fungus and bacteria — that take advantage of weakened defenses.

But, we’re just getting started; changes in air and water launch a cascade of other events. Crops that for centuries have supported vast populations are failing, and that has initiated a migration of refugees. Immigrants from Central America to southern borders of the United States are fleeing violence and poverty, yes, but many have abandoned farmland that no longer supports their nutritional or economic needs. The same story is true of Syria, Somalia, South Sudan and other places where livestock deaths and crop failures have contributed to the migration of millions. Immigration, in turn, provokes political unrest in regions once secure in their borders, and this inevitably drags police and the military into the picture. (The Pentagon calls climate change a “threat multiplier.”) Think about the resulting political unrest in Europe and the United States. The World Bank predicts that because of climate change, 140 million people, within the next three decades, will migrate from their home countries.

Climate change threatens home environments even in places where food and water are abundant. Deniers argue that we have always had floods and storms and fires. True, but never like this. Recent floods in the U.S. Midwest set records, and threaten not only buildings and lives directly, but indirectly as farmers are forced to abandon their fields and their plans for planting, all of it costing billions of dollars. Halfway around the world, the recent typhoon striking Africa was reported as the largest weather event in the history of the southern hemisphere. Sea level rise is a recorded fact, and so too are the accelerated calving of glaciers and the shockingly rapid melt of sea ice in the North and South Poles. Low-lying coastal cities suffer as a result — years earlier than we thought they would.

At present, most of the items on this list leave large sections of the world’s population untouched, at least directly. But most people are beginning to see other effects of climate change. Consider the economy and how much money has been spent to deal with population migrations, floods, hurricanes and wildfires. Rebuilding, relocation, fortification of coastal cities, augmentation of military budgets and much more cost billions of dollars, figures that will grow logarithmically as the grip of climate change tightens.

Finally, and directly addressing the concerns of my old friend, when we write about climate change, we are very much in our lane, because human health is inescapably impacted. We generally address the subject in terms of One Health — the intersection of human, animal and environmental health. Erosion of the environment has a direct and measurable effect on the health of animals and humans.

Consider the example of the irritating and dangerous mosquito. At present, this pest is having a field day venturing into regions once known to be inhospitable to their temperature-sensitive bodies; mosquito-free zones are shrinking. But the environmental impact on the mosquito’s contribution to disease goes much further. Not only does a warming climate enable the mosquito to venture into new territory, but viruses grow more quickly in warmer temperatures, allowing them to develop more rapidly within the mosquito’s body. That’s critical when you consider the relatively short lifespan of a mosquito — about 10 to 12 days. That’s also about how long, on average, it takes for a virus to grow. So ordinarily most mosquitos have only a brief day or two to spread the disease. When the virus within the mosquito grows more rapidly, however, it arms the mosquito for more of its life to infect people before it dies. This is no small matter when so many viruses are transmitted by mosquitoes, which now have more days to spread an infection across wider geographic regions. This is one of a thousand examples laying bare the subtle but significant impact of climate change and the interconnectedness of the environment, humans and animal health.

So, on this Earth Day, when we discuss the environment, we are also discussing the topic of human health where WiRED focuses its energies and resources. As this discussion makes clear, climate change cannot be confined in a silo. It touches everything on the planet and is undeniably woven into the concerns of educators, physicians, veterinarians, and experts in agriculture, livestock, hydrology, law enforcement and military, banking, economics, transportation and, well, most all disciplines. Climate change is in a thousand lanes and it certainly is in the lane of this health education organization.