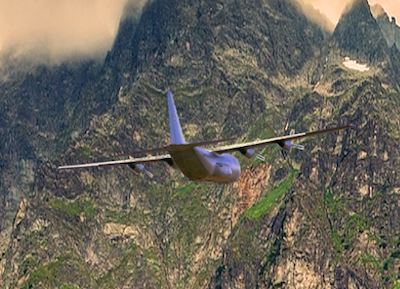 Life on the planet is remarkably interconnected; humans, animals, we might even add plants, interact in delicate, mutually dependent associations. Presiding over all living things are the air and water — the environment that sustains us. WiRED International’s focus on health education has increasingly promoted the unifying perspective known as One Health — the intersection of human, animal and environmental health. During the coming year, we will examine how environmental conditions are changing the profile of diseases that affect people and animals throughout the underserved regions where we work. To start the series, we look at policies that make a powerful and direct impact on the environment, now teetering on the edge of a disaster. We are less concerned about politics than people, but, given current trends, we cannot discuss one without discussing the other. The political decisions that impact human health are great, and the time to change them is short.

The C-130 aircrew is on schedule for a parachute drop of food and supplies for an isolated village in the Himalayan foothills. Suddenly, the flight engineer looks up and stares wide-eyed at an enormous mountain filling the windscreen directly in front of the 40-ton aircraft, now closing in at 400 knots. The engineer screams an alarm just as the terrain awareness warning sounds a piercing siren throughout the cockpit. Startled crew members shout for the pilot to turn the plane sharply away.

The pilot is unconcerned. “No,” he says, “The mountain is no danger; you’re hysterical, and the terrain warning is wrong. I wouldn’t worry about some mountain. Believe me; you can believe me; don’t trust your eyes; the air is calm, everything is fine. We’ll continue on course.”

“But, captain, it’s right there, look! The mountain is off our nose, and we’re flying directly at it. We have seconds to bank the plane, seconds to save our lives.”

“Now, now,” the pilot blithely says. “Turning the plane will take us off course, increase fuel costs and hurt my efficiency rating. No, everything is okay for now, let’s worry later about later.”

This story is, of course, an allegory for America’s response to climate change. The mountain is dead ahead — red flags warn that without a course correction impact is imminent. And yet the pilot refuses to correct course. Crew members know the outcome of inaction. There will be a point in the flight, as there is a point in our advance toward an overheated planet, where course corrections will come too late. The experts tell us that point is nigh ahead as we rush toward it at 400 knots.

A majority of Americans believe climate change is underway. Informed observers urge that we alter our course immediately to avoid a climate catastrophe. So it’s confounding that so many national leaders ignore the mountain directly in front of us. But it’s worse: they’re increasing our speed! In the past two years, we have reversed course corrections — environmental regulations — that were designed to avoid this impending disaster.

The evidence is abundant and unambiguous: overwhelming empirical data, satellite photos, historical records; a soaring frequency and severity of hurricanes, wildfires, swamped islands and eroded beaches; debilitating floods and unprecedented droughts; mass migration of humans and animals to safer environments. Like the looming mountain, this accumulation of evidence fails to convince skeptics who instead push the throttles forward.

Supporters of climate action are bewildered by heedless deniers, but they should understand something: if the hard science, melting ice caps, rising seas and all the other evidence have not convinced them climate change is urgent and real, then nothing will convince them. A few skeptics may slowly come around, but we don’t have the time for their conversion — we’re about to hit the mountain.

Is there any way to persuade the skeptics?

WiRED’s health education work has taught us something interesting about health prevention efforts: It isn’t always effective to argue that action today will prevent illness tomorrow. The link is real, but it may not always be tangible, and efforts made now to avoid bad outcomes later are a tough sell. We use a different strategy. We point out that action today yields rewards today (even as it heads off trouble down the road).

For instance, when we promote exercise and diet to fend off obesity, diabetes and hypertension, we make the point that these behaviors not only help avoid health problems later, but they reward us right now with strength, energy and a better appearance. Diet and exercise are thus linked with positive outcomes in the present. We use a similar strategy for rheumatic heart disease, vaccinations and other prevention-related issues.

So how does this relate to climate change? Many environmental policies are positioned to address climate change in order to make the greatest impact in the decades ahead. The climate-benefit delay is like the disease-prevention delay: time stretches and attenuates the cause-effect link. “So you want me to drive a hybrid today to save the glaciers at the end of the century?”

But, climate change comes with an additional problem: some media, industries and political leaders have made “climate change” an incendiary symbol and a loyalty test. Mere mention of the term inflames many voters and shuts down communication. As a result, environmental issues get hopelessly mired in climate change issues. This is not by accident; it’s part of a strategy to weaken environmental regulation.

So, what can we do to persuade climate deniers? For one, we might not insist that they accept the reality of climate change before addressing our environmental policies. Instead, avoid the climate change issue and look at the immediate benefits of cleaning up the environment. Independent of climate implications, fixes to the environment can have immediate health and economic benefits, and that connection might find support among some in the denier community.

Consider carbon pollution caused by power plants and factories. Polls show that most voters believe these sources contribute to climate change, although deniers are not likely to be in that group. But it isn’t necessary to trumpet climate change to deniers. If we hope to reach them, avoid use of that politically charged term and stress that emissions reduction provides a healthier environment, clearer visibility, improved air for children and adults alike. No matter their political leanings, not many people yearn for dirty, polluted air and crave the thick, brown fumes shrouding Beijing and Mumbai. By sidelining climate change, we can focus directly on the immediate and positive health effects of carbon reduction — reduced asthma, emphysema, COPD, heart disease and cancer . . . and an increase in cleaner, easier-to-breathe air.

A related example is renewable energy. There is much to tout about wind and solar energy, starting with economics. With steeply decreased equipment costs and increased efficiency, renewables are now more economical than most carbon-based fuels. As a result, economic challenges to renewables go away. With a large labor pool needed to install and maintain renewable power sources, the dogged “jobs argument” goes away. Wind and solar power save money, produce jobs, clean the air we breathe . . . all NOW. The straight-forward and honest argument is compelling, and while renewables benefit climate change — the very mention of which only inflames the discussion — that connection isn’t needed to make the case.

Will avoiding references to climate change and instead connecting polices to immediate benefits have an impact with deniers? We don’t know; but we do know that the denier community is now driving us headlong toward disaster. Advancing wise climate policies and regaining America’s leadership in the struggle to address global temperature rise might give us a chance at turning this around.

We’re at a point where we need to bring all ideas to the table. The thoughts expressed here argue that we should present our case to ordinary voters honestly and carefully. Especially on this matter, the rank and file can have an impact on members of Congress, and we need to motivate elected officials and increase their comfort in publicly acknowledging the disaster that lies ahead. Institutional forces behind climate denial will fight this, as they do all environmental interests, and they will continue to sway a portion of the population. But our approach may bring along enough people, enough voters, to help us alter the destructive policies now advancing. At this point, in this democracy, the majority view of climate change must prevail in setting public policy, and that must happen very soon if we have any hope of steering away from the mountain.