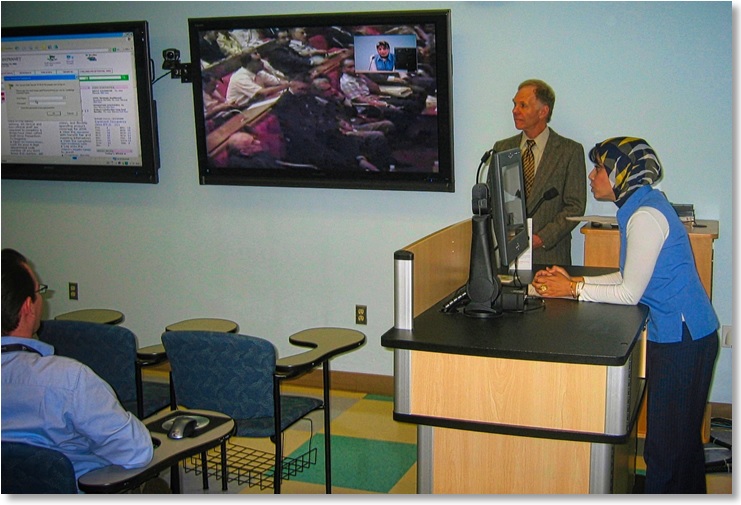 WiRED’s work in Iraq began in the spring of 2003, just as international coalitions were setting out to assist with the reconstruction of the country’s core facilities. Projects included repairing the electrical grid and critical government buildings and upgrading the telecommunications system to contemporary standards.

WiRED’s role was to develop the resources needed to provide physicians, nurses and medical students with a means of accessing the latest research on the diagnosis and treatment of disease. The flow of medical information into Iraq had been blocked since the mid-eighties, when Saddam banned journals and texts and prevented doctors from attending conferences. Such disdain for the medical profession remains a puzzle to many of us.

The following story, published in 2006, describes the first several years of WiRED’s work in Iraq. It was written by Jim Fisher-Thompson, a staff writer for Washington File, a product of the Bureau of International Information Programs in the U.S. Department of State.

Washington – Thousands of Iraqi doctors, nurses and medical students are upgrading their healing skills, as well as repairing a medical infrastructure neglected by former dictator Saddam Hussein, thanks to an innovative program linking them with hospitals and medical databases worldwide.

Selnow, addressing a February 28 luncheon sponsored by the Diplomatic and Consular Officers, Retired (DACOR) association, said the concept is to harness “the soft power” of American information technology (in contrast to “hard” military power) to help change the world for the better.

WiRED does that using the most up-to-date computer information technology to link medical professionals and health educators with medical facilities, libraries and university databases as well as the Internet in places like Bosnia, Iraq, Kenya, Kosovo and Sierra Leone, he said.

“With our MICs we can convert a simple room into a world-class medical library and information center,” he explained. “The idea is to tie them in to the mainstream. If we can bring information tools in a [computer] hard drive, we can save time and money.”

Selnow provided an example. “When we opened our MIC in Baghdad’s main hospital [with its 2,200 resident physicians] we had doctors, nurses and students standing four deep in front of the computer terminals waiting to access information,” Selnow told his audience.

He added that there have been examples of Iraqi surgeons looking up the latest techniques and procedures on a MIC computer just before they walked into the operating room to treat their patients.

“Saddam basically destroyed Iraq’s medical establishment,” as he did many other inclusive institutions in the country, Selnow said. “Basically, we see health care as a unifier,” he said, and in conflicted regions like the Balkans and Iraq, WiRED works to rebuild knowledge that cuts across religion, ethnicity and politics.

In Iraq, the initial funding for the 39 MICS came from the U.S. State Department, Selnow told his audience.

In May 2003, he said, “we began setting up computers in rooms located in hospitals, schools and community centers” throughout the country. Iraq does not have broadband computer Internet access, so WiRED often had to set up satellite connectivity, which made the cost of installation more than $6,500 per MIC.

Costs in Iraq have been kept down, he said, through in-country purchase of much of the computer equipment, as well as contracting locally for computer and communications maintenance. Iraqis have proven to be very resourceful in re-entering an information age that Saddam denied them for so many years, he added.

After setting up the MICs, WiRED’s next project in Iraq is launching four telemedicine centers (TMCs) that will serve as “electronic

bridges between medical schools” in Iraq and the United States, Selnow said. The four computer/Internet centers will be located in Baghdad, Basrah, Irbil and Mosul.

He said the goal of the TMCs is “to provide seminars, lectures and high-quality diagnoses over the Internet.”

The launch of the TMCs on March 15, Selnow said, will feature a video/computer linkup between Children’s Hospital in Washington and Baghdad’s main hospital. An Iraqi child feigning illness will be presented to American doctors, who will consult with Iraqi counterparts and visually examine the patient over the video linkup to produce an informed diagnosis and treatment recommendation.

Selnow predicted the TMCs will be as useful and popular as the 39 medical information centers, which are commended on the WiRED Web site by an Iraqi doctor. Dr. Safwan Taha, a surgery professor at the University of Basrah College of Medicine, said the centers “made it possible for us to obtain medical information and literature that was otherwise out of our reach.”

(The Washington File is a product of the Bureau of International Information Programs, U.S. Department of State. Web site: http://usinfo.state.gov)

[This story was issued as a press release by the U.S. Department of State and published on ReliefWeb.int. on March 7, 2006]