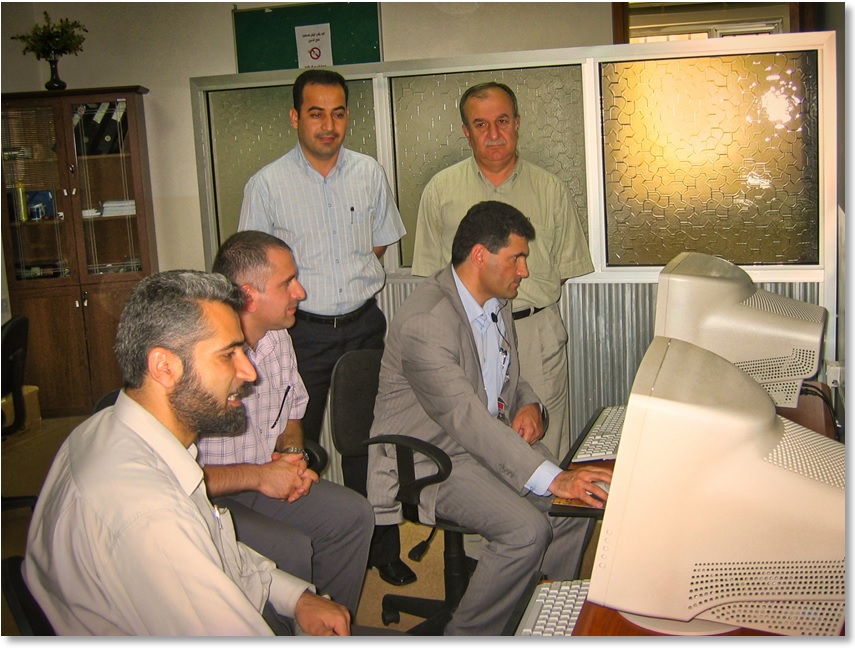 Doctors in Erbil, Iraq switch on computers at a new Medical Information Centers provided by WiRED.

WiRED began working in Iraq in the spring of 2003, and over the next few years we installed 39 Medical Information Centers (MICs) in hospitals and clinics from Basrah in the south to Duhok in the north. The U.S. Department of State was our primary sponsor, and we had support from other organizations and companies that contributed equipment and helped with logistics. As we recognize our 25th Anniversary this year, we will provide other stories about our projects in Iraq.

The following article from 2004 offers four testimonials about the value of the MICs to Iraq’s medical community. The first observation is an official statement by the Iraqi Ministry of Health. Three additional statements are offered by Iraqi physicians who had direct access to the MICs. They outline some of the ways those computer-based resources helped them and their colleagues, especially at a time when Iraqi doctors were isolated from outside resources.

Joseph Nye, a professor at Harvard, advanced the term “soft power” to mean when a country sets an example to encourage other countries to want the outcomes we want. While there was a lot of “hard power” underway in Iraq at the time, WiRED’s work became an example of soft power. We provided evidence-based medical information and Internet connections where possible throughout Iraq. We were sharing medical knowledge without cost or obligation or coercion for the benefit of physicians and with the understanding that the program would ultimately benefit the Iraqi people.

The State Department saw WiRED’s MIC program as an example of American medical diplomacy, or soft power. That view is confirmed by the testimonials offered here.

Testimonials from Iraqi Ministry of Health and Iraqi Physicians 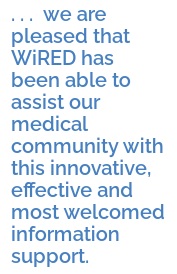 For many years, Iraqi physicians have been denied access to medical developments taking place outside our country. That has made the practice and the study of medicine more difficult and it has denied our professionals the opportunity to offer Iraqi patients the latest, and often most successful diagnoses and treatments. In 2003, WiRED International began supplying our medical schools and teaching hospitals with computer based libraries. The CDs and now hard drive libraries and the many Websites gave our doctors and students an opportunity to read the latest medical journals and catch up on the most recent technical developments. We are eager to see this Medical Information Center project expand from the current facilities to many other hospitals in Iraq. Information is key to our profession and we are pleased that WiRED has been able to assist our medical community with this innovative, effective and most welcomed information support.

I just wanted to tell you how thankful we are here for the services provided by the information centre that Wired International instituted in Basrah. You have given us a very resourceful information centre and the Internet site connections WiRED provided us with made it possible for us to obtain literature that was, otherwise, out of our reach. The centre you erected here is very busy and many times one has to wait to get a free terminal—just to let you know how beneficial it is for us on daily basis. Everybody here sends you their greetings, and we hope that you can widen the scope of your help for us because we are in serious need for it. And we have noted earlier, out of all the people who promised us “the wonderland” you are the only one who really delivered us one. Keep up the good work, God bless you.

I just wanted to tell you that our books have been out of date for many years, we have had no reliable source of medical information. The WiRED Centers, with computers, CDs and Internet access provide our first connection to technical data developed by researchers and doctors in other countries. This information obtained at the Medical Information Centers has been a genuine benefit to me personally and to other Iraqi physicians. Thank you very much for your big help to us Iraqi MD’s and hope you may be able to bring us further programs that will help other health staff and not just Iraqi MD’s.

I got your email address from the director of our hospital … Maternity and Peadiatric Hospital in Erbil to send you a word of thank you for your devotion and help to us, Iraqi doctors … With all the money being spent in Iraq, the few funds allocated to these computers and databases have to be one of the best investments in our medical future. Good medical practice needs the best information and these Centers help us access it. We’ll get more sophisticated systems later, but under current conditions, these facilities are pretty remarkable. I am Dr. Sardar Al-Jaff … a pediatric practitioner in the Maternity and Peadiatric Hospital in Erbil … I just wanted to send you these lines to say that we are much grateful to WiRED for this great humanitarian work that helped us much in our practice. Thank you WiRED. 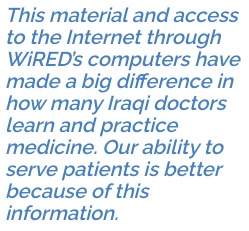 You may not know me … but I know you well and your organization through what you have installed for us in Medical City Center in Baghdad. I’m Dr. Manal Oda … an Iraqi MD and a graduate student of board of medicine in MCC – Baghdad. I wanted to tell you that for many years, we have studied and practiced medicine without access to the latest technical information. Early in 2003, WiRED installed several Medical Information Centers at Medical City Center and in other Baghdad locations. These facilities gave us the first chance to review the latest journals and research papers. This material and access to the Internet through WiRED’s computers have made a big difference in how many Iraqi doctors learn and practice medicine. Our ability to serve patients is better because of this information.

Thank you very much Prof. Selnow … I, on behalf of all graduate students humbly say to you that your program has helped us a lot … and we are looking forward to your having other programs implemented here in Iraq. With my best regards to you all in WiRED.