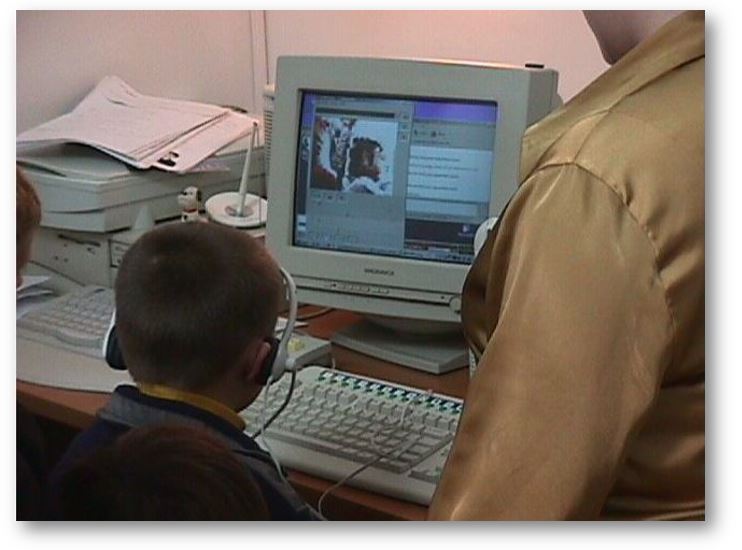 By the late 1990s the war had destroyed much of Kosovo’s medical capacity, and many children requiring life-saving treatments had to be sent abroad to receive high-level medical attention. The children were often sent alone, because there were insufficient funds to pay for parents to go with them. This story from our Archives relates a video event that took place between parents in Prishtina, Kosovo, and the young patients being treated at a pediatric hospital in Pisa, Italy. Gary Selnow worked on the video visit connection in Prishtina, and Suellen Crano coordinated the connections in Pisa. It’s worth noting that now, in 2022, when Zoom is a household fixture, such resources were not publically available in the year 2000 (even Google wouldn’t be available for four more years!). This Video Visit program required the skills of computer technicians who ran the Kosovo signal through a satellite connection. 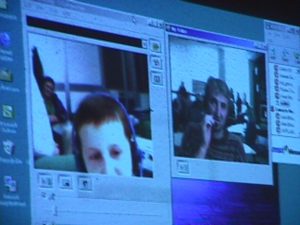 With the click of a mouse, Blerim (age 12), and Airrullah (age 7) began a conversation that lasted for hours. Blerim has been in Italy at the Hospital of Pisa since April, and underwent a bone marrow transplant one month ago. Airrullah has been in the same hospital for seven months undergoing chemotherapy and radiation treatment for leukemia. It had been too long since the medical staff had seen a smile on his pale and sunken face. Blerim made up for the lost time as he chatted with his parents and six brothers and sisters. He was especially delighted by the sight of his 1-year old baby sister in the monitor and the sound of her voice through the headset. Airrullah grinned from ear to ear and even laughed as he talked with his father and seven brothers and sisters.

Their families were equally excited as they assembled at the computer screen in an Internet Center in Pristina. It was the first contact they had made with the boys since they were separated, and they were overjoyed to see that their sons were recovering and still chattering in their native language. The boys are undergoing treatment in Italy because there are no treatment facilities in the Kosovo region.

According to Dr. Mauro Lazzeri, Medical Director at the hospital in Pisa, the fear and trauma of the treatment is often intensified by the children’s separation from their families. He noted that the effect of such a “Video-Visit”can be nothing less than medically beneficial.

Kosovo, its economy disrupted and its population dispersed, is a land of limited resources. The region lacks medical treatment facilities, and most families, faced with the necessity of sending their children abroad for care, simply cannot afford to accompany them. WiRED, comprised strictly of volunteers, has been active in the Balkans for the past three years establishing free Internet centers for students, professionals and business persons. Dr. Gary Selnow, executive director of WiRED, recognized the need for a free flow of information between separated family members and began the development of the “Video Visit” project last Spring. 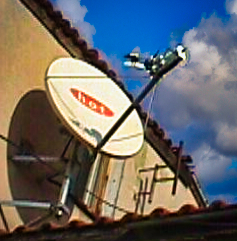 Relying solely on donations and his own resources, Selnow acquired the needed equipment and with the aid of volunteers here and in Europe, arranged for the initial “Video Visit”. The Video Visit program will be quickly expanded to six other hospitals in Europe. WiRED will establish an Internet Access Center at each hospital and will conduct regularly scheduled visits for Kosovar families and the young patients. Plans also include expanding this work beyond Kosovo to other countries participating in programs that arrange medical treatment for children in Western hospitals.

The Computer Centers in Kosovo are provided by the U.S. Department of State through the Kosovo Internet Access Initiative (KIAI). The KIAI project is coordinated by the International Information Programs, Global Technology Corps, under the direction of Mr. David Zweigel. This program has been designed to provide war-torn Kosovo with aid and to promote that province’s transition to democracy. Seven centers now operate in Kosovo.

Several years ago, WiRED’s Executive Director, Dr. Gary Selnow, wrote a series of essays presenting some of our history. The following two pieces look at how WiRED got started in Kosovo and how we came to realize the need for our Video Visit program.

In 1999, not long after the end of NATO’s aerial bombing of Serbia, the U.S. State Department asked me to join a team that the Department had assembled to build a network of seven Internet Access Centers (IAC) across Kosovo. The State Department had been tracking WiRED’s Internet programs elsewhere in the Balkans, and it recognized that WiRED International knew the region, knew the technology involved and knew what training programs were necessary to prepare administrators to manage local centers.

The Trip from Pristina to Skopje

We left the International Organization for Migration (IOM) offices in Pristina, Kosovo, early on a summer morning in 2000, allowing plenty of time to reach the Skopje airport in Macedonia, 54 miles away. It was Sunday, so traffic was light. Five hours should be enough time to navigate our van over the badly damaged roads, breeze through the border crossing and cruise on up to the airport, where the crowds would be minimal. And so, four of us — the driver and I, a nurse and a five-year-old boy — rolled out of town and on our way. Except for the nurse and the boy, we were strangers to each other.