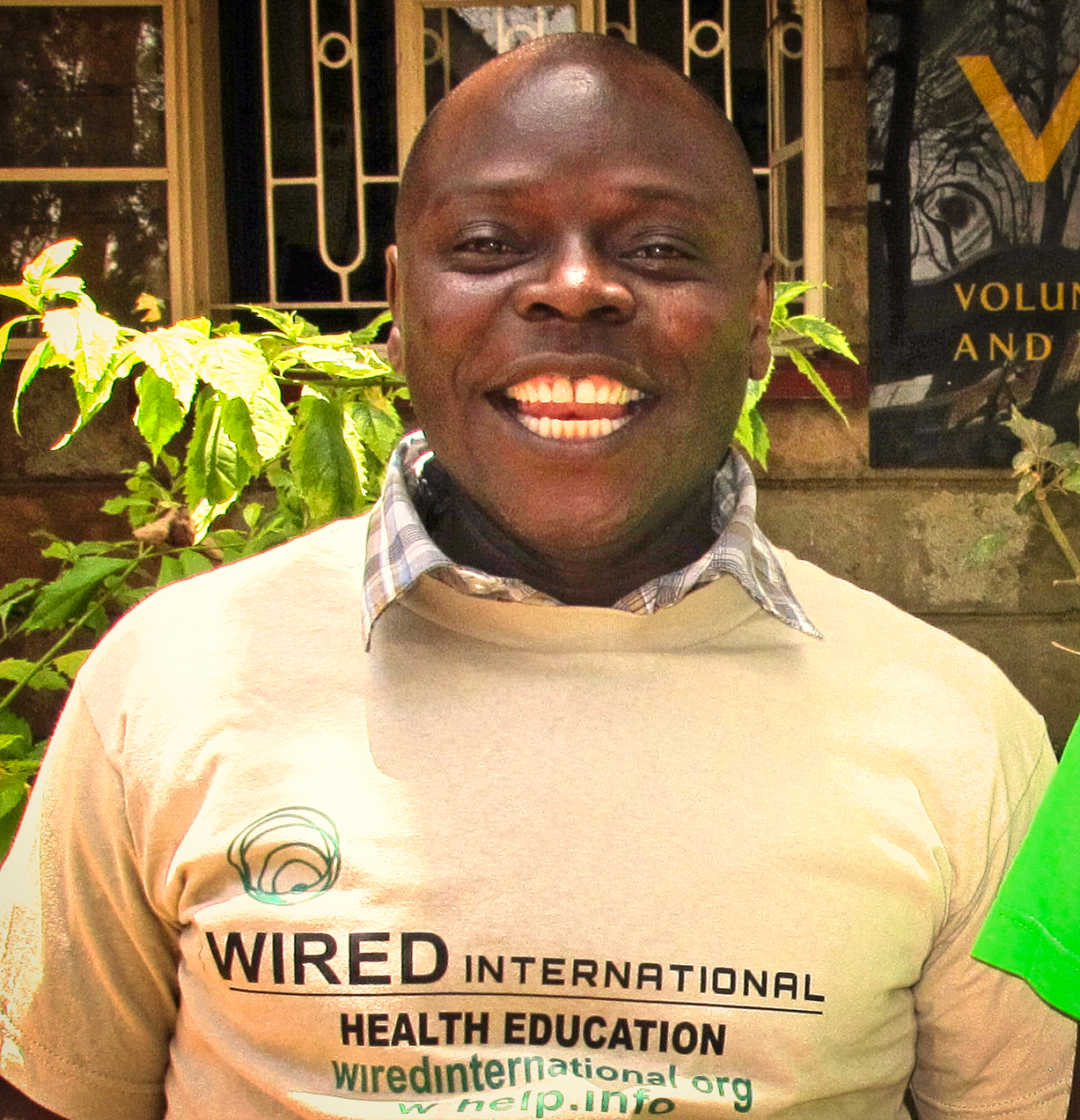 College Graduate and IT Expert in Kenya

WiRED International’s board of directors and volunteers are deeply saddened by the death of George Ochien’g Olale on September 15, 2020. Mr. Olale, IT director at Kisumu Urban Apostolate Programmes (KUAP) Pandipieri, has been an informal member of the WiRED family for many years and lived in Kisumu, Kenya, one of the low-resource communities where WiRED serves.

Mr. Olale was born October 9, 1978, in Kisumu. In 2003, as 22-year-old, he started working as a security guard at Kisumu Urban Apostolate Programmes (KUAP) Pandipieri Center and went on to earn a bachelor’s degree in information technology (IT). He became the IT expert at Pandipieri, where WiRED operates a Health Information Learning Center.

Mr. Olale was part of the team that developed an electronic medical record (EMR) system for clinic operations at Pandipieri. He worked with WiRED volunteer Brian Columbe, in the U.S., who handcrafted the comprehensive database, and with WiRED board member Sameer Verma, Ph.D., a professor at San Francisco State University, who provided the software tools to back up and preserve the important medical data.

I had the pleasure of working with George on an IT project for the Pandipieri medical clinic. When we communicated either by phone or e-mail, he was always friendly with a great sense of humor. It was clear to me that George was devoted to his IT job, and he loved the people he worked with at Pandipieri. Separated by more than 8,000 miles, George and I always worked online, but I genuinely wish I had a chance to meet him in person.
— Brian Colombe, WiRED’s IT volunteer, Kansas City, Kansas

Last year Mr. Olale was featured in a WiRED web story, where he said, “Malcolm X once stated that education is the passport to the future, for tomorrow belongs to those who prepare for it today.  . . .  Thanks to KUAP Pandipieri for having faith in me and in my work and for supporting my education at Great Lakes University, and thanks to WiRED for trusting me and believing in whatever I do.”

Mr. Olale is survived by his beloved wife Christine and his three children, Hildegard, Ivy and Denver. WiRED joins the KUAP Pandipieri family in sadness at this time as we celebrate Mr. Olale’s remarkable life and his contribution to elevate the health and knowledge of his community.

In His Own Words

I started working in Pandipieri in the year 2003 as a watchman [security guard]. By this time I had a secondary school education, but couldn’t pursue my studies because of our family’s economic situation. My mama had lost her job as a nurse, and she was doing a manual job to support the education of my brother and my sister. This is what forced me to work as a watchman.

As Nelson Mandela said, “Education is the most powerful weapon which you can use to change the world.” Therefore, when I was working as a watchman, I had to follow my passion to learn IT. I used part of my little salary to enroll in one of the computer schools in town. I could not manage to pay for a full course on IT — my dream career. I did not finish the whole office package, but I studied the rest of the courses on my own.

In May 2006 I moved from watchman to an IT position, because the center needed someone with computer knowledge. This was a big shift, a big turning point in my life — from being a watchman to working in an administration office. My first assignment was to come up with graphs in Excel showing disease trends seen at the outpatient clinic. The KUAP program director, Sr. Bernadette Nealon, was so happy with my work that she offered me full employment in the health program. 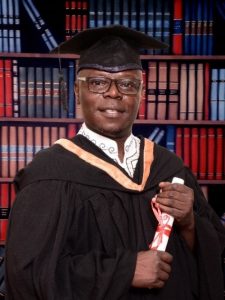 With support from KUAP Pandipieri, I registered for additional IT training where I earned my diploma in 2013, then enrolled in the Great Lakes University of Kisumu in 2016. I graduated August 23, 2019, with a B.S. in IT.

During the period I was studying for my bachelor’s degree I gained a lot of technical know-how from Mike Oloo, who has been doing maintenance on the WiRED Health Center computers at KUAP Pandipieri. My breakthrough came when we began designing and building the EMR system for the outpatient clinic. This opened my eyes to programming, and I must sincerely thank Brian, Sameer and Gary for putting me on this. Through their guidance, I managed to install the EMR and server successfully; the program is now operational. I also conducted clinic staff training on the use of the new EMR.

Today I am the head of the IT and Data Department at KUAP Pandipieri. As to my personal life, I have a wife and three children (two girls and one boy), and I like reading and going to the gym.

Most of his adult life George was associated with KUAP-Pandipieri.

From 1999-2002 George was one of a group of initial students in Mwangaza Art School who enrolled to undertake digital art and fine art and graduated with a diploma in fine art.

From 2003-2020 George was an employee in KUAP-Pandipieri and was very versatile in his work as a night security guard, a tutor in Pandigraphics, a teacher in Pandipieri Non-Formal School teaching street-connected children and finally from 2005-2020 he worked tirelessly in KUAP-Pandipieri Community Health Programme and particularly in Kenya Conference of Catholic Bishops–Kenya AIDS Response Program (KCCB-KARP) project where KUAP-Pandipieri is a partner. George was head of the KUAP ICT & Data Department and he had many friends in the KCCB-KARP Project.

Whatever task George undertook he did with great enthusiasm and determination, including his studies that resulted in the completion of a bachelor’s degree in information technology at Great Lakes University Kisumu, where he was graduated on August 23, 2019, with first class honors.

The fun, laughter and spontaneity that emanated from George brought a lot of togetherness to KUAP-Pandipieri staff because wherever he was there was a lot of merriment and joviality irrespective of age or gender.

George was married to Christine and they have three beautiful children: Hildegard, Ivy and Denver who were the joy of his life.  Everything he undertook was for his children, and they visited him in his workplace, where Denver was always eager to sit in his chair.

When George passed away on September 15, it was then we realized the strength of his character. Staff phones are being answered non-stop as George’s friends sent condolences and shed tears in a safe place.

There is an emptiness in KUAP-Pandipieri since George passed away, but we also know that we were very privileged to have known such a wonderful person. We can truly say George in life we loved you and now that you have reached your eternal home in heaven we love you even more.
— Sister Bernadette Nealon, Kisumu, Kenya

It was easy to be proud of George. He worked his way up from a night watchman to head IT Officer at Pandipieri. To get there, he worked hard, studied hard and earned college degrees, all to prepare himself for the responsibilities of his important job. Smart and dedicated, George was, without question, a warm and genuine man, interested always in new ideas and new challenges.

How eager he was to get the new Pandipieri EMR system up and running. It was a matter of pride that he could contribute this to his colleagues who provided health services to needy people. Like all the people at Pandipieri, George saw the work as a team effort, everyone joining in together to achieve a noble goal. George’s role was to improve the flow of clinical information, a service to clinicians, pharmacists, lab technicians and, of course, to patients themselves.

George also had a mischievous side. I recall one occasion when George and I were working on details of the EMR system. The EMR developer, Brian Colombe, who lived in the United States, worked with George via email to design the system and make it operational. 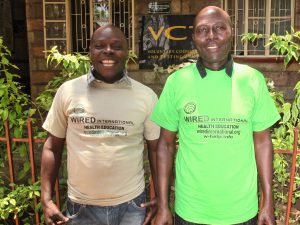 It was noon Kisumu time, and George and I came to a point where Brian’s help would save us hours of work. I looked at George and said, “You know Brian could resolve this in 10 minutes, but it’s 3 a.m. in Kansas City.”

George gave me a look that said, “Let’s call him!” Then he said out loud, “I’m sure Brian won’t mind if we call him at 3 a.m.” Hmm, we thought, he’s two continents away, what can he do to us?

So, we called and woke Brian. I said, “George told me to call, and we didn’t think you would mind.” Fortunately, Brian, another good soul, unsure at first if the call was genuine or a prank, ended up working with George to sort out the EMR problem. We wished Brian a good sleep and advised him in the future not to answer the phone so early in the morning; you never know who could be calling.

For several years afterwards, George and I jokingly threatened to call Brian at 3 a.m., just to see if he would answer his phone.

George’s passing is a terrible loss for his family, for his colleagues at Pandipieri and for many of us at WiRED who have worked with George over the years. He made our lives a little brighter, a little better and for that I can’t thank him enough.
— Gary Selnow, Ph.D., WiRED Executive Director